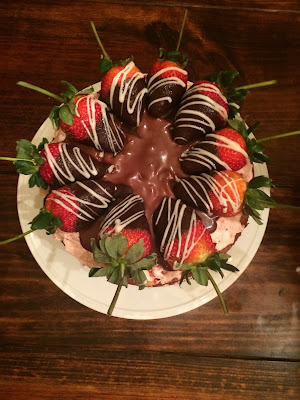 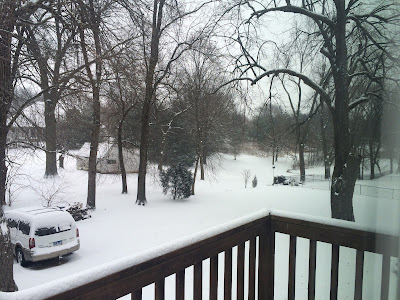 Guess it's time to get everyone up.
Posted by Karin @ 6ByHisDesign at 6:32 AM

Wednesday.  We sit at the table with the pages of his planner filling the space between us.  "Did you talk to your teacher about your missing writing assignment?"  He answers, and the beginning of doubt pricks my heart and mind.  We continue to talk.  A sound becomes present in a corner of my hearing.  Crunch. Smack.  Slurp.  Munch.  My head snaps towards this cacophony while the once undetected burning ember of impatience ignites within me.  Before a thought crosses my mind, I react. "Chew with your mouth closed!" The unsuspecting recipient of my wrath looks up.  Suddenly my attention turns to this one, and my words are not chosen wisely.  My heart pounds, my temper flares, my focus scatters.

I breathe in awareness.  I breathe out apology.  Refocus.  Scouts.  "I'm going to make a list of calls you need to make tonight for merit badges.  How are you coming with snow sports?  Have you printed off the worksheet why haven't you printed it off let's find it do you remember who your merit badge counselor is let's write down a script of what you should say what do you mean you don't have his number," I fire in rapid succession.  His white flag is raised.

Writing this brings tears to my eyes.  There are a series of channels replaying in my mind.  Each a similar show.

Tuesday.  Started dark and quiet.  Alarm ringing.  Regret.  Snooze.  Alarm again.  I stumble down the stairs for coffee and hope for a moment of quiet reflection before chaos.  Chaos is not expected, however, as I leave for work before the kids are up.  Morning chaos is the dad's worry today.

Snowy roads.  Backed up traffic.  Work.  I leave for the orthodontist.  Late.  I pick up the oldest daughter.  We go to lunch.  Phone rings.  School warns detention for another.  This one coughs.  Now more phone calls, a doctor's appointment, asthma, medicine, after school, grab snacks, back to work with everyone in tow.  Late.  Tonight our family presents a talk on communication to top notch nursing students.  My badge is missing, the elevator opens and a brand new baby comes on, we exit because my bigs have big germs and this little needs to fight.  My hands shake, my heart pounds, not ready, I smile, we begin.  Everyone home.  Everyone shower.  Everyone bed.  I sit.

Webster defines the word unfocused as "not relating to or directed toward one specific thing (such as a particular goal or task)."

I argue internally.  You're unfocused.  I am focused.  On the calendar.  On the next presentation.  The next game.  The next assignment.  The next book.  The next class.  The next need.  The next unexpected.  Raising children.  To reach their potential.  To love their Father.  To have opportunity and respect that opportunity.  A job.  That stretches me but pulls me from those children at times, and other times brings us together.  On being a Proverbs 31 wife and rising to the task of being the wife God calls me to be.  Being a daughter.  Knowing what it means to be the daughter of a woman who raised me well and is independent and growing in age.

Simplicity is beginning to mean back to basics.   Simplicity this week meant homemade chocolate chip cookies on a surprise snow day.


When the kids were younger and I stayed home full time, we baked a lot.  Back then we didn't eat a ton of sweets except for what I baked in my own kitchen.  Today, with everyone running hither and yon and kids making choices at school for lunch that include cookies and sugary snacks every day, we just don't have time nor caloric back space to fill with sweets at home.  On Wednesday, though, when I came home from work and most of the kids were out playing in the snow, I decided to grab cookie ingredients from the cabinet and throw together a batch of goodness like I did when the kids were smaller and times just seem to have been simpler.

It may sound small, but this act was a simple one of love, of tugging out memories that are fading so quickly from the brain spaces.  I am so grateful that this week we were able to slow down on a snowy day to enjoy an afternoon at home at a slow enough pace that we could enjoy the sights, smells, and tastes of this childhood treasure: warm chocolate chip cookies dunked in a glass of creamy cold milk.

My favorite song right now is Breathe by Jonny Diaz.  Every time it comes on the radio, Meiners says, "Mom!  The right song at the right time!" because really?  I need that song every moment of every day.  After the millionth moment of absolutely losing my marbles this week, I posted this in our kitchen: 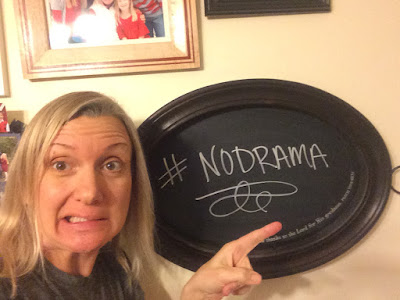 "No Drama Momma" became my battle cry.  I have to admit - it helped.  Mostly.  I would guess my moments of complete and utter loss of control of my patience reduced by...maybe 10%?  Nah.  I kid.  Mostly.

In addition to BREATHING and REMEMBERING that Jesus wins in the midst of the chaos of single-parenting while The Mister worked out of town with a winter concert this week and extra rehearsals, basketball practices, breakfasts and dinners and crazy school lunch spending, three different school starts, work, two hour bean bag snuggle conversations discussing painful childhood moments for one of my people, and additional doctor's visits because someone broke his arm, we also enjoyed an exorbitant amount of coughing that led to a stethoscope to a chest and every-four-hour breathing treatments.  Oh yeah.  Breathe.  And Just Be.  Because chaos calls and all I really need is for Him to blow air into my lungs (and into hers!) and to keep me moving and going and ultimately worshiping because truly, that is the only point.  He reigns.  He gives.  He wins.  It is good.  It is good to rest at God's feet, and to just be.  Take it in.  Fill your lungs with the peace of God that overcomes.  Lay down what's good and find what's best. 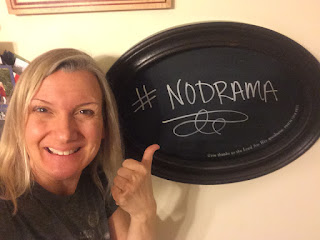 2016 is upon us, and I am challenged by the beginning of a new year and a dear friend.  Let's get started!

I do try to keep the kids' activities to only one apiece, but this year I threw all restraint to the wind.  The kids are doing more than ever, and so are The Mister and I.  First up, ice skating lessons.

The kids' big brothers and big sisters invited them to ice skate in December.  The idea is a great one in theory, but only Sashi has ice skated before.  With the fear of Pookie falling and the awareness of how sore my back was after helping only Sashi skate with Girl Scouts last year, I knew having them go with the med school kids would be disastrous.  Insert ice skating lessons as an experience gift for Christmas.  Great idea!  Only The Mister didn't think so.  He was convinced someone would get hurt.  "But the first thing they'll learn is how to fall safely!  What could go wrong?!" I questioned repeatedly. 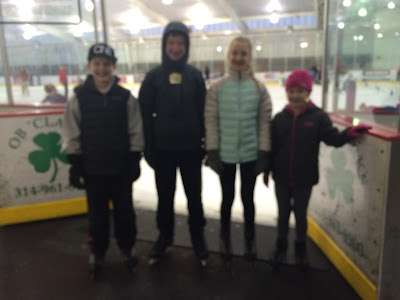 First Ice Skating Lesson Day came on Friday.  All the kids were excited!  A few of them eagerly awaited the start of class so impatiently that they insisted on going out on the ice before lessons began.  Initially, I firmly said, "No!" but my resolve abated and out they went.  Except the oldest.  He said he would stay put.  My absent-minded-because-I-was-intensely-preoccupied-with-worry-about-the-three-already-on-the-ice response of "Do whatever you want T" came across as a taunt, so out he went.  He made it to the middle and back - I was thrilled!  When he shuffled out one more time, however, he took a tumble while I wasn't looking, and the rest, as they say, is history.  Arm broken, skating lessons, snowboarding lessons, and basketball on hold.  (I said I had thrown our cautious schedule to the wind, right?  Maybe this is God's way of saying I really should slow down.  Maybe.)

Another first and new beginning is CYC basketball for Meiners.  He played with Upward for five years but looked for a more competitive league this year.  Unfortunately for my little athlete, he didn't make the Junior High team :( :( :( so he decided to try the catholic league.  It hasn't been without bumps in the road - boys who have played together themselves for years found it difficult to welcome a new boy, but his second game was this weekend.  They didn't win, but last year his team was Division III and they won the league, so they were moved up to Division I.  Then, the team they played yesterday was the team who won the entire championship last year.  Great competition for Meiners to improve upon!  He came off the court red faced and sweaty, having loved every minute of it!  Seems it will work out just fine. 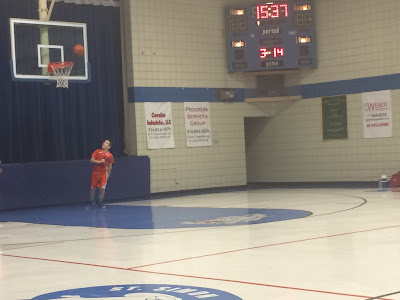 Other beginnings include new books for Sashi.  At Barnes and Noble this week, she chose the newest American Girl book.  She was thrilled to discover Lea is from St. Louis!  I love that the St. Louis heroine is traveling to Brazil and will be studying animals.  Little S thinks for now that she herself will be either a vet or a teacher.  We also bought her a pristine, new Kumon book to practice her multiplication.  That particular book thrills her far less.  I'll take the good with the bad.  ;) 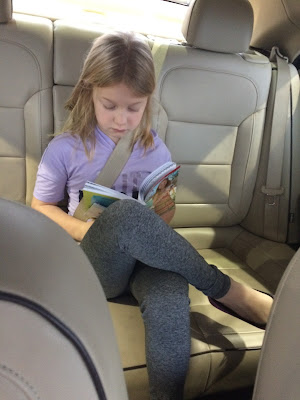 For me, the end of my quiet, leisurely mornings by the tree before dawn, sipping on toasty chocolate-laced coffee and immersing myself in bible study, listening to the newest Amy Grant Christmas CD or simply reading for pleasure has come.  Instead, 5AM workouts have begun again.  6AM kid wake up calls have returned.  Slurping cold coffee between trips to school and hopping in the shower at the last minute before running to work has become my new normal again.  I've contemplated words for the year and resolutions, loosely landing on "Joy" and "Prayer," neither finding itself on a necklace or refrigerator magnet.  Resolutions are more contemplations in my mind than decisions, yet this one - this 52 week challenge - came at the right time.  A good time to begin photos and writing, connecting and catching up. 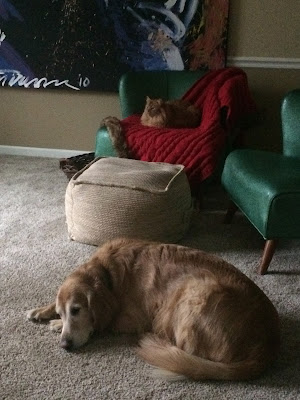