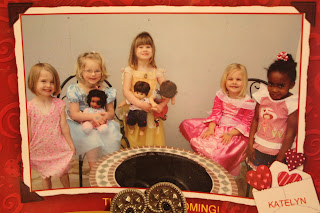 I guess the twins were about four when Pookie came to me one day and asked if she could have a party. It wasn't her birthday. There really was no reason to have a party. She just wanted one. Just because.
So, plans were made. Invitations sent. My talented & good friend, Mama V, made a very special Strawberry Shortcake themed cake. The boys were shipped off for an afternoon with Grammie. Little girls began arriving. Although it was a few years ago now, I remember lining these petite femme fatales along the couch cushions and encouraging them to hang their toes out onto the coffee table while I came by with their polish color of choice and gave each of them a pedicure. We own lots and lots... and lots... and, well, let's just say lots of dress up clothes. So, each girl made an outfit selection. Then they just played. They raided the doll box. They swang on our indoor tire swing. They truly seemed to enjoy themselves. Before the end of the afternoon, we snapped their picture to send in the mail later as a thank you for their attendance. The boys returned home. T walked in the door and asked, "When's my Just Because Party?" So, plans were made, invitations sent, Mama V made a VERY special fire truck cake. ... And this is how we began having Just Because Parties.
Back then, I swore them off after that second one. Although simple in context, my nerves were frazzled by their end. I was done. Leave it to birthdays and holidays. No more parties at my house ~ just because! And then, one day, Pookie began reminiscing about the fun she enjoyed with her friends that simple afternoon. Soon enough, she voiced that inevitable question. "Mom, when can I have another Just Because Party?" With those tender blue-gray eyes. I knew immediately. It's about the memories. Even if they don't remember the cost, the cleaning, the chaos. They shouldn't. They should remember the occasions when we opened our doors and celebrated nothing with their friends for the fun of it. We celebrated~ just because. I smiled on the inside. Plans were made. Invitations sent. The story continued. 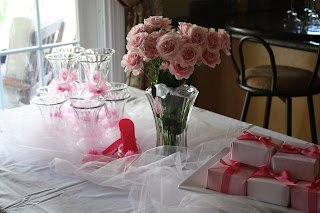 To date, we've entertained kids for no reason other than to dress up, to play trucks, and to decorate cookies, to name a few. Sometimes, they are devised to watch Disney Channel Movie Premieres. This is what happened last Friday. There was reason to party, for no other reason than just to party. Just because. 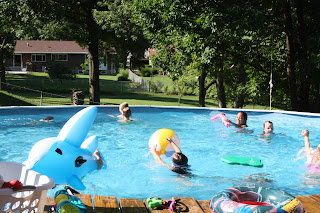 Plans were made. Invitations sent (via the phone this time - boy was that easier!). All the moms gushed about how excited their daughters were in anticipation. (That's always a nice thing to hear!) I'm getting a little better with my party planning, too. We've watched girls grow restless just watching a movie. So we added a swim part to the party. And pizza. And jewelry making. And decorations. (I use the internet now for ideas!) And then the movie ~ Princess Protection Program. Oh. And Princess Ice Cream Sundaes under the twinkle lights outside afterwards (that rival the ones at the Princess Lunch at Disney, if you ask me --- cuz I'm unbiased like that.) 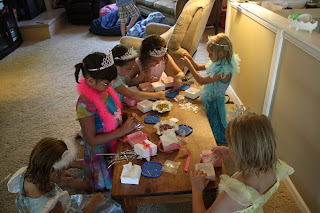 At the end of the evening, Pookie threw her arms around me and sincerely gushed, "Thank you, Mom! Thank you so much for a great party." It was exhausting. I needed a cocktail. But no one drowned. Everyone left with smiles and their own version of sincere thanks. It was definitely a good reason to throw a party. There was no reason. It was "Just Because."
Posted by Karin @ 6ByHisDesign at 6:00 PM