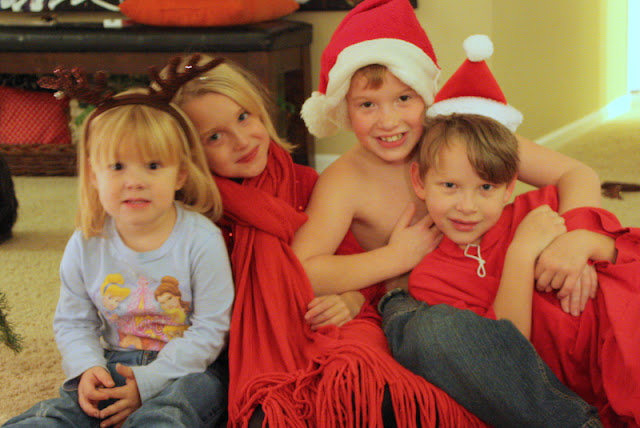 The kids' annual family Santa Play - a bit more chaotic this year than last, with Meiners break-dancing while the twins attempted dialogue and Sash in the reading room waiting for someone to come play with her...but a picture makes the memory last forever.  :) 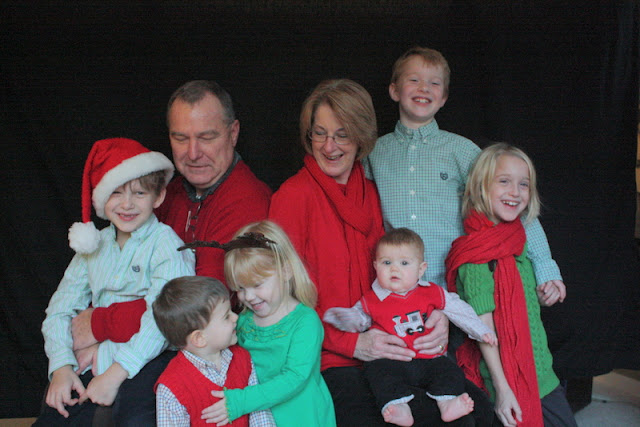 Before Sunday dinner this month, we tried to take some serious grandparent pictures.  Soon after this particular shot, Meiners kissy faced and those two admiring each other down in front really did kissy face and the littlest began to cry, and it was very successful.  When I used Windows 7 to fuse the best expressions into one photo! 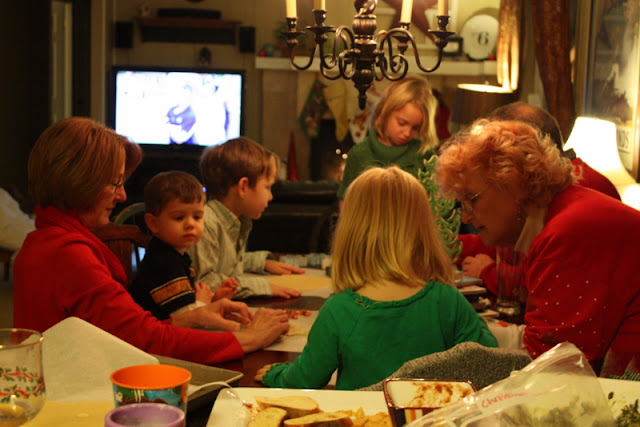 Cookie decorating at Sunday dinner early in the month.  We've enjoyed family Sunday dinners the first Sunday of every month (with a short break over the summer because we already have so many family events with birthdays and such).  I think this was a successful tradition that began in January 2010.  I've liked it, anyway.  We served pulled pork sandwiches with baked potatoes and some other things I've already forgotten (see why I blog?!).  We taste tested 3 different bbq sauces to decide which was the best.  I'll post recipes on the cooking blog another day... 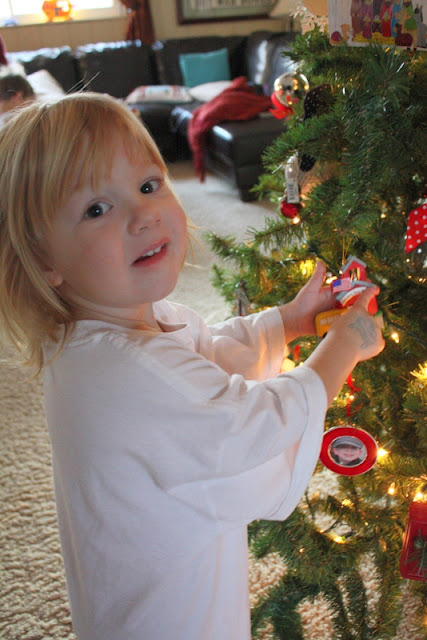 St. Nick arrived on December 6th with much anticipation!  T received a karate ornament, Pookie a dolphin one, Meiners a surfer, and Sash a school house.  I'm hopeful Santa brings her an Elmo ornament that plays music.  If she were to find something like that in her stocking on Christmas morning, I'm pretty sure she'd think it was Christmas or something!   ;) 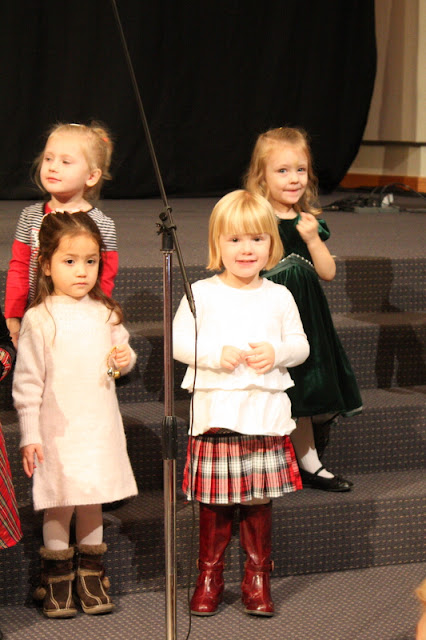 A series of Christmas program photos from church.  Love the boots, Sash! 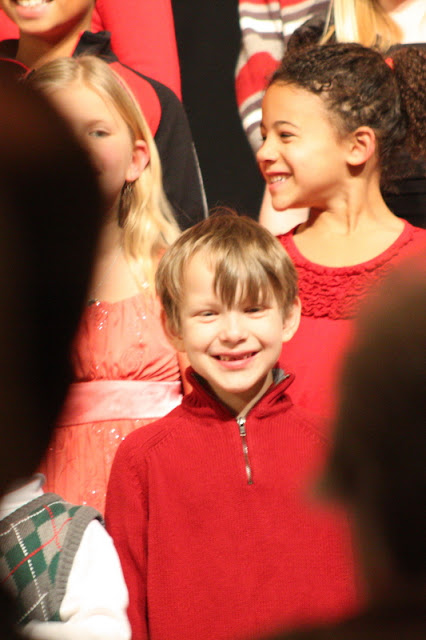 A very happy boy.  I don't think he was feeling 100% here, actually.  And he needs a haircut (who is his mother??).  About 24 hours later, he lost his cookies in the trash can at Schnuck's.  I think it was his mother who could be heard advising her brood of four to "Run!" and then "Stick your head in this trash can!"  She's quick on her feet like that. 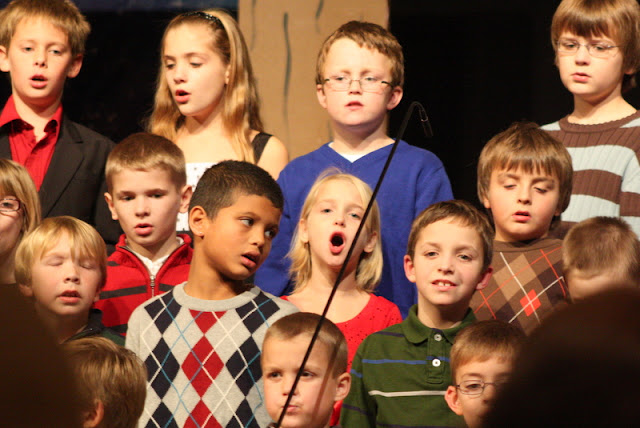 OK, I don't know all these kids around her, but Pookie was born to sing.  And she loves doing it.  Go Girl! 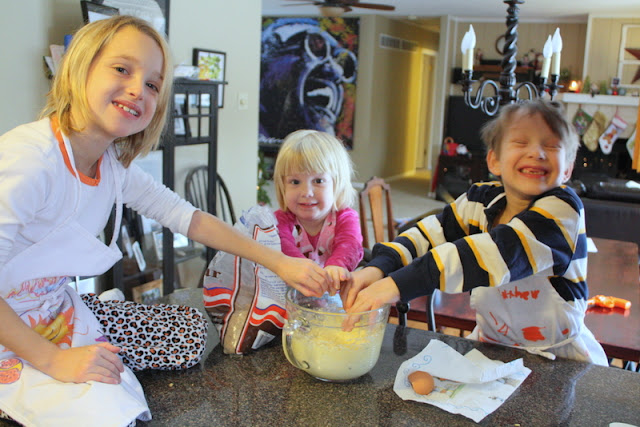 Doncha love it when your kids bring home cookbooks from the school library and insist that right then and there you must make one of the recipes?  Thankfully, it was a Sesame Street cookie cookbook and I love Elmo and sugar cookies.  And the really were quite tasty.  I think Obi the Golden Retriever ate the last batch we baked. 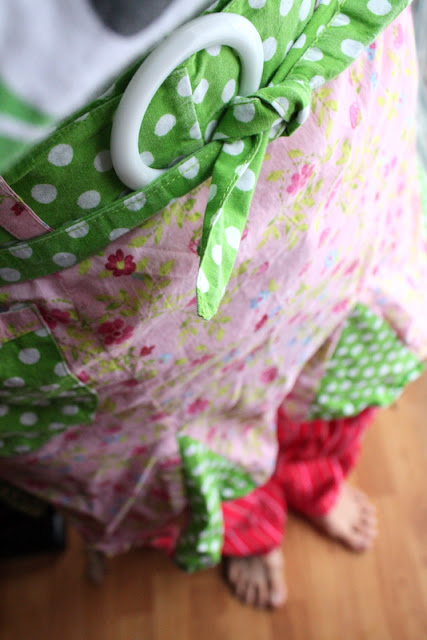 A photo from our first snow day of the year.  I seriously love snow days.  This was noon and we were all still in our pjs, had enjoyed a morning of playing Wii games together and had just finished baking (more of those cookies from up above).  I honestly don't know who enjoys snow days more - me or them.  But I'd have to say me, because I absolutely treasure those relaxing days with all the kids at home. 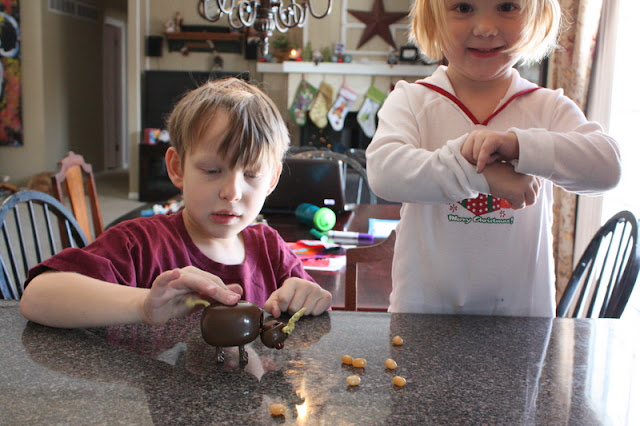 Advent calendar seems to be going well this year.  (Elfie was sent by Santa last year to keep me on track regarding this.)  The kids insist I stay on top of it.  Here, the little guys are playing with their new jelly belly pooping reindeer they got that morning.  No one ate the jelly beans, thankfully, because Matthew was recovering from the stomach flu. 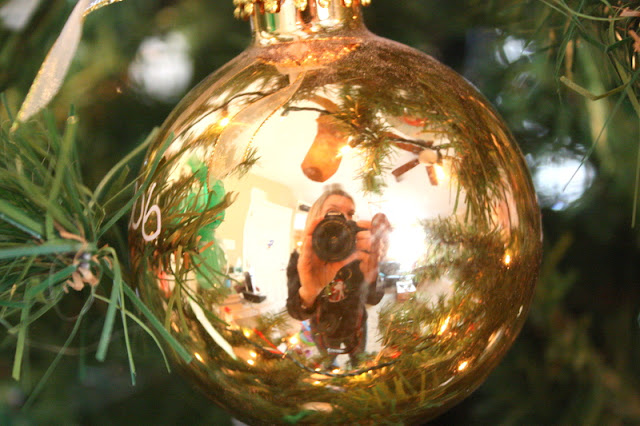 Me trying to be artsy. 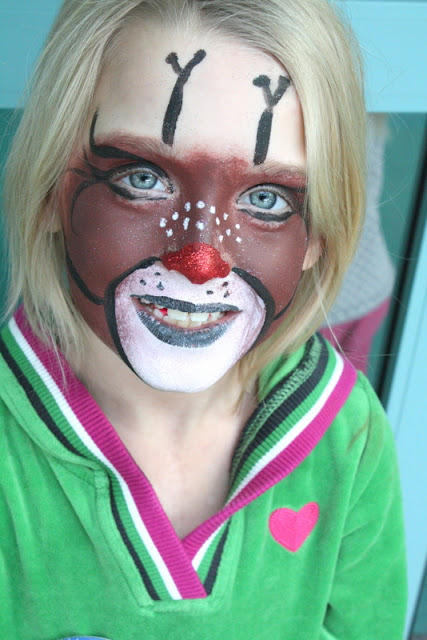 A face painter at the Make A Wish Christmas Party truly was artsy and dolled up Pooks with this awesome Rudolph face.  Just beautiful and sparkly in real life!
I'll be back, hopefully, later in the week to share more pictures of our December goings-on.
Merry Christmas!﻿
Posted by Karin @ 6ByHisDesign at 9:29 PM