I'm not good at math.
So the days of my series have to go with the date.
I can't bring myself to say Day 3 when it's Day 5 - a.k.a. February 5th.
And because I just like to be a little eccentric.
Cuz it's only Day 3 of the series, but it's fun in my head to skip 4 altogether and jump straight to 5.

So that's what we're doing.

And today, I'm loving kids. Sort of their spirit, their child-like faith, they're irreverent ability to turn something kind of cruddy into something wonderful and fun.

I simmer and stew and pout.

Sort of like a child, but even a pouty child can turn their frown upside down within ... moments, really. BigDaddy will say to Pouty Sasha: Show me your attitude! And she immediately grins.

I like to wallow in it a while longer than that.

Case in point, Wednesday night. It was our annual cookie platter making extravaganza for the heart group. (I've mentioned that before.) Unbeknownst to me, it was also hubby's week to be late manager on duty (he's like the Undercover Boss in some respects - he likes to do the same work as his people, I guess. But I wasn't all too happy with his timing, I'll just be honest with you). On the same night that both boys had karate, and then the Pinewood Derby weigh-in, plus eve of Hubster's birthday, so there was present-purchasing to be done. And cookies to make. And deliver. But they didn't get delivered.

So Wednesday night, I'm sitting, slouched over the table with a few dozen frosting-stuffed, sprinklific, heart-adorned blobs o' cookie mass meant for medical professionals, but sitting in front of me. Wondering what I was going to do with all of them. I think I even cussed at them. But just once.

When what to my wondering ears did I hear, but one little voice asking, "May I have one?" 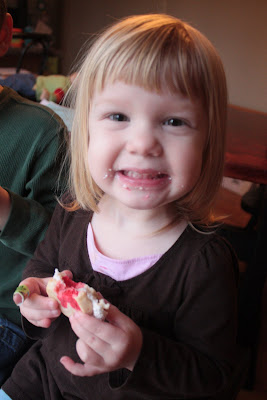 And a row of smiles. 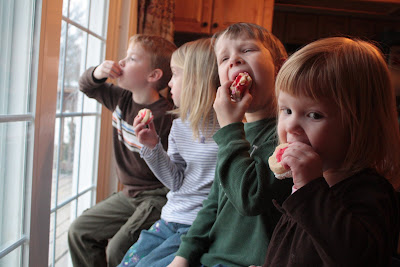 And a new attitude.

So, in a nutshell, I love kids. Especially mine.
Posted by Karin @ 6ByHisDesign at 11:16 AM