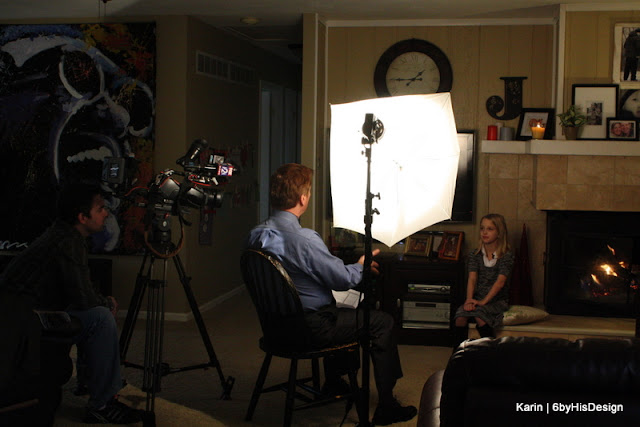 Just in case you haven't heard, Erin Bode wrote the most amazing song about my daughter Katelyn with her heartbeat embedded within the song.  You can buy the song on iTunes by clicking here.  It is seriously the best song ever.  And I'm not just saying that because it's Katelyn's story and her heartbeat.  I promise you ~ you will love this song!  (Seriously - go buy it!!  ;))

Last week, Dan Gray, of Fox 2 News and KPLR Channel 11, came to interview Katelyn here in our home.  You can hear his interview {here} and more about the story of the making of THE MOST AMAZING SONG tonight during the evening news.

I had a fun time with this interview because it was very laid back - in my own living room!  I was surprisingly quite calm and so appreciative of all the chores the kids have been assigned lately because the house was presentable without much tension or work!  {How nice is that?!}

The videographer arrived later than Dan Gray, so we had the chance to really sit down and talk with him ... in retrospect, I should have asked him lots of questions about what it's like to be a reporter and his transition from one big station locally to his current big stations.  But I'm a mom.  So I talked to him about his family.  And his travels.  Maybe he's just lucky I didn't ask about his lunch menu and afterschool plans?

Anyway, it was another super fun opportunity for us and we continue to say thank you to everyone involved in making this one of the most amazing and memorable winters of our lives!  Later in the week Katelyn participated in a photo shoot for a magazine which I'll talk about later.  In the meantime, watch the news tonight!  I'm hopeful that Dan mentions the one thing I haven't been able to say during any of our previous interviews...and just in case he doesn't,I'll say it here anyway:


I want everyone to really understand at the beginning of the song when Erin sings, "I wanna make you understand the world that I know, surrounded by angels, here now we go again" that this really is our story.  We are surrounded by angels who were our sweet friends, who traveled this road with us, and the many amazing friends who still are traveling it with us every day.  Ultimately, this isn't just Katelyn's story or just Katelyn's heartbeat.  It is all their stories.  It is all their heartbeats.  And now they are getting the chance to be heard, too.

So, I just think that is super cool.  Watch the news tonight, but seriously, go buy the song, too.