I can say honestly that I don't pay a ton of attention to the news. I don't play the evening news on tv with the kids in the room. I don't even watch it on the late edition. But something tragic and overwhelming, really, happened nearby while we were on vacation last week, and it has just made me sick. A townhall meeting scheduled just down the street in our local junior high school broke out in violence over the current healthcare debate.

Here is a pic of my husband and me taken on our riverboat cruise last Friday night in Minneapolis. 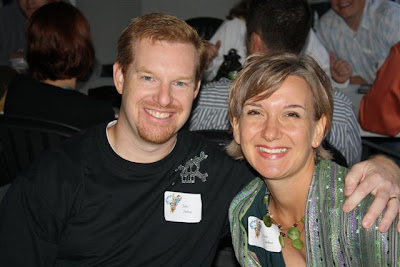 I love this photo. It's a nice one of the two of us - just enjoying each other on a Mississippi Riverboat and a welcomed, albeit quick vacation together with our sweet family of 6. I sort of just want to post it. Yet, I think it also tells the story of who we are.

I guess you could say we're midwestern to the core. I was raised on a farm and a small college town in South Dakota and Missouri. As a teenager, we moved to 'the big city' --- Kansas City, to be exact. I am not radical. I am not even political. But I do care about what is happening in our country. And I would like to have my voice heard. I don't think that is really occurring in our country today. Perhaps those with differing views say they haven't had a voice before, so now they do. Does that mean it's OK to take mine away as you find yours? I am not an angry mob. I am not an organized protestor. I am an American with a voice.

Do you have one, too? Regardless of what you believe and how it aligns or differs with mine, write a letter to your representatives. Mine don't actually represent my views. But if enough of us write, it can make a difference. Don't sit idle and wait to see what happens in September. Hand write a note to your congressmen & women and your senators. If we don't, we have added nothing to the conversation.