Things That Go Bump in the Night

I, however, did not.

At about 4AM, Loud Dog started to bark. Several choice thoughts flew amuck through my mind in my grogginess, yet I rolled over and fell back asleep. A few minutes later, My Man said, "Karin, I think I heard the front door."

Chilling words at 4AM with a house full of children fast asleep.

I muttered something about it probably being the dogs (because, yes, our dogs CAN open the front door) when suddenly I. heard. the. squeak. of. a. door. And Loud Dog started barking furiously.

Every precious thing in my life became perilously propped on the edge of an enormous cliff.

My husband leapt from the bed, and ran screaming into the hallway in a barbaric effort to scare the holy living whatever out of whatever or whomever lurked behind the darkness. Yelling continued, and I cautiously eeked my way out of bed.

He looked up at me, his face pale and confused. "My balloon," he whispered.

A host of emotions raced their way through my core. Relief. Disbelief. Frustration. Anger. Rage.

Seems that yesterday, at church, T created a project using two balloons. He received one extra balloon from his Sunday School teacher because of a project malfunction. T proceeded to spend the afternoon blowing up his balloon and watching it soar around the room. He told the neighbor about the balloon. He focused on the balloon to the neglect of listening to his mother telling him to put on his socks and shoes to prepare to leave for the Boy Scout Bicycle Rally. He lost the privilege of having his balloon. I put it into my pocket. Before we left for the bike rally, I cleaned out my pockets. The contents, which included a sticky wad of Kleenex, a few balls of lint, and a white balloon, fell into the abyss of our giant, smelly green trash can. Particularly smelly, as it held the remains of a dead, rotting squirrel left in the backyard over the weekend by the friendly neighborhood hawk association.

When T requested his balloon after the rally, I admitted throwing it away and declined climbing into the trashcan to retrieve it. But T, treasuring up his beloved balloon in his heart, secretly made up his mind that at some hour of the darkest night, he would seek the balloon's return on his own. Not knowing that Daddy put the trashcan out on the street in preparation for the morning pickup.

After discovering the trash was not in the garage, T made his way to the dark curb only to realize he had to pee. So he opened the front door to find his heroic, ableit somewhat insanely disheveled father, screaming explitives, and stomping down the hallway towards him. 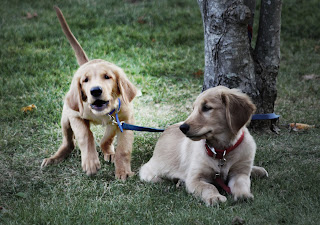